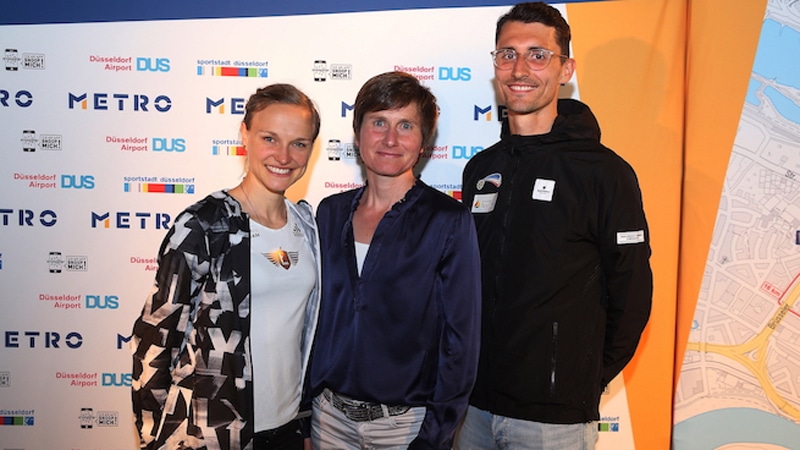 Fedor Shutov is the favourite for the Metro Marathon Düsseldorf on Sunday. The Russian, who is competing as an Authorised Neutral Athlete (ANA), holds the fastest personal best in the elite field with a time of 2:11:26. While Tom Gröschel is in the national focus fellow-German Anna Hahner returns to marathon racing on Sunday after a long injury break. Both are the favourites for the national championships, which are included in this race. The international qualifying times set by the IAAF for the World Championships in Doha in late September will be a target for a number of athletes in Düsseldorf, among them a group of South Americans. For the men this time stands at 2:16:00 while the women’s mark is 2:37:00.

„It is my aim to develop the race further,“ said new Race Director Sonja Oberem. The former German top marathon runner, who finished eighth in the Olympic Marathon in Atlanta in 1996, took fifth place in the World Championships in 2001, won a bronze medal at the European Championships in Munich in 2002 and ran a personal best of 2:26:13, took over from Düsseldorf Marathon founder Jan Winschermann recently. Due to financial reasons this year’s elite field is not as strong as it had been in the past. However Sonja Oberem is determined to present stronger fields in the future again. „It was very important for us that our title sponsor Metro renewed our contract for another two years until 2021. Additionally we have great support from the city,“ said Sonja Oberem.

In the absence of African elite runners it is Russia’s Fedor Shutov, who is the favourite on Sunday. The 33 year-old clocked his personal best of 2:11:26 in 2016. More recently he ran 2:16:48 in Dublin last autumn. While Russia’s Athletics Federations remains suspended Shutov belongs to the group of Authorised Neutral Athletes (ANA).

Germany’s Tom Gröschel returns to the Metro Marathon Düsseldorf, where he ran a very good debut last year. He produced an upset by taking the national title with a personal best of 2:15:20 here in 2018. „In contrast to last year, when I decided at short notice to run my marathon debut, I am much better prepared now. It is my goal to run a personal best on Sunday,“ said the 27 year-old, who was Germany’s best marathoner in the European Championships last year in Berlin, where he finished in 11th position.

There is a group of four runners with personal bests of sub 2:17. Mikhail Krassilov (Kazakhstan/2:16:08), Ronald Schröer (Netherlands/2:16:19), Malcolm Hicks (New Zealand/2:16:28) and Luis Orta Millan (Venezuela/2:16:30) could all go for the Doha qualifying time. Debutant Miguel Amador Montilla of Colombia might be in for a surprise. He ran 66:27 in the Medellin half marathon in altitude last year.

However the 29 year-old comes back from a long injury period. Her recent half marathon result from Berlin, where she ran 1:15:42 does not suggest that she is capable of running sub 2:30 times yet. And accordingly Anna Hahner said: „It is nice to be back and running smoothly again without any pain or problems. But it will not be about times this spring.“ She plans to run the Berlin Marathon in September and will go for the international Olympic qualifying time of 2:29:30 there. Since defending champion Fabienne Amrhein had to cancel her start in Düsseldorf at short notice due to an injury to her heel Anna Hahner is likely to win the national title.

One of the favourites is Peru’s Jovana de la Cruz. The 26 year-old ran her most recent marathon back in 2016, when she finished the Olympic marathon in Rio in a fine 36th position with 2:35:49. Earlier that year she had improved her personal best in Houston, taking fifth place in 2:31:33. In 2018 she ran her half marathon PB of 70:56.

Erika Abril Suarez of Columbia and Norway’s Runa Falch hold personal bests of 2:33:33 and 2:33:52 respectively while there is a former Metro Marathon Düsseldorf champion returning to the race: Hungary’s Zsofia Erdely was the winner in 2016, when she clocked her personal best of 2:35:37.