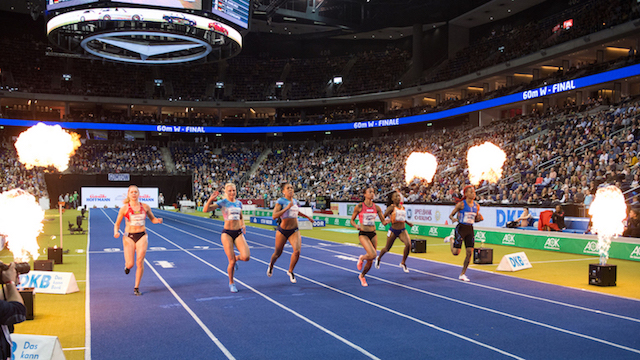 ISTAF INDOOR also in Düsseldorf from 2021

A big stage for athletics in Düsseldorf: After a 15-year tradition of the PSD Bank Athletics Meeting, in 2021 the ISTAF INDOOR Düsseldorf will thrill fans in the ISS DOME, which will then hold 10,400 spectators. Officials from the sports city Düsseldorf agreed on a cooperation with the meeting organisers of the Berlin ISTAF INDOOR, which has been causing a sensation in the German capital since 2014 with a new athletics event concept. This was announced by the organisers in Düsseldorf today, Wednesday, 5 February 2020.

“The PSD Bank Meeting has been consistently developed further and established as a world-class athletics event. But now it is reaching its limits. The athletics arena has been sold out for years, the capacity is limited to 2,000 spectators, although the interest in tickets has always been considerably higher. With the next step that we are now taking, we want to demonstrate the future of athletics in the ISS DOME together with the creators of the Berlin ISTAF INDOOR and give even more athletics fans the chance to experience the sport up close and personal”, says Burkhard Hintzsche, City Director and Head of the Sports Department of the state capital Düsseldorf.

Dutkiewicz: “This is amazing” / Lückenkemper: “The best indoor meeting in the world”

At the ISTAF INDOOR in Berlin, world-class athletes have been put in the limelight since 2014 with pyrotechnics, music and lighting effects, spurring them to top performances. With consistently more than 12,000 fans, the ISTAF INDOOR is the world’s largest indoor meeting, which from 2021 onwards will be held in Berlin and Düsseldorf. Also the athletes are enthusiastic about this extraordinary meeting. “Athletics is such a great sport – and this meeting manages to show how much fun it is, how many emotions it evokes and how big of a show our sport can be,” enthuses Germany’s hurdles star Pamela Dutkiewicz. “When you run through the finish line, you feel the flames, you feel the heat. The music, the light – it’s amazing! It’s absolutely fantastic that this will happen twice a year in the future. And I’m already looking forward to my home race in 2021 in the ISS Dome in Düsseldorf. The fans will love the ISTAF INDOOR.”

The ISTAF INDOOR is moreover the “favourite meeting” of Germany’s fastest sprinter Gina Lückenkemper, who came to the press conference to Düsseldorf from the USA, where she is currently training for the season with an international training group. “The ISTAF INDOOR is simply the best indoor meeting in the world and represents the future of athletics. You can see from the amazing performances how much this inspires the athletes”, says Gina Lückenkemper. “Compact, clear, actionpacked – that’s exactly the right way for athletics. It’s great that there will now also be an ISTAF INDOOR here in Düsseldorf. Fans can look forward to two real spectacles in 2021.”

The ISTAF INDOOR Düsseldorf kicks off on Sunday, 31 January 2021. The grand “final” of the mini-series will then take place five days later in Berlin, on Friday, February 5, 2021, at the ISTAF INDOOR in the Mercedes-Benz Arena Berlin. “We were delighted that the sports city of Düsseldorf has approached us and that we have the chance to realise our idea of the ISTAF INDOOR in the ISS Dome together with the Düsseldorf meeting organisers,” says Martin Seeber, meeting director and managing director of TOP Sportevents GmbH. In addition to the ISTAF INDOOR, the Berlin sports agency is also realising the ISTAF in the Berlin Olympic Stadium, the oldest athletics meeting in the world. “The ISTAF INDOOR in Düsseldorf is another extremely exciting project with which we are strengthening our brand ‘ISTAF’, upgrading the ISTAF INDOOR and broadening our horizons. Düsseldorf is enthusiastic about athletics and has always hosted a great indoor meeting. We will do everything in our power to offer the fans a thrilling sports spectacle with absolute world-class athletes in the modern ISS DOME“.

As there is no circular track in the ISS DOME either, the fans will be sitting very close to where the action happens, just like in Berlin. The compact, approximately three-hour programme, in which one highlight follows the next, will also in Düsseldorf consist of seven competitions. As in Berlin, the disciplines are 60 metres (women and men), 60 metres hurdles (women and men), long jump women and pole vault men. The seventh competition (in Berlin Discus) will be selected at a later point in time.

The central element remains the youth competition for children organised in cooperation with the regional clubs. Martin Seeber: “At the ISTAF INDOOR in Berlin, too, the school sprints are an absolute highlight for the students. Being able to give your best in front of more than 10,000 fans is something you never forget.”

Today the ticket pre-sale for the 1st ISTAF INDOOR Düsseldorf on 31 January 2021 has also started. Five ticket categories (plus VIP) are offered. With the early-booking discount, fans can save 20 percent on all ticket categories (VIP tickets excluded) until the end of March 2020. The cheapest tickets thus cost only 14.40 euros. Tickets with early booking discount and further information are available at the ISTAF ticket hotline 030/301118630 and online in the ticket shop at www.tickets.istaf.de.

Further information and tickets at www.istaf-indoor.de.